How the Ford Capri made its Mark

Home » How the Ford Capri made its Mark
Previous Next

How the Ford Capri made its Mark

When Ford launched the Capri in 1969 it was intended to be the European equivalent of the Mustang and it certainly made its mark on this side of the Atlantic.

This famous fastback coupé was originally designed by American Philip T. Clark, who was also involved in the design of the Ford Mustang. The Capri used the mechanical components from a Corsair frame and when it was launched, Ford described it as ‘The car you always promised yourself’. The Capri went on to be a highly successful car for Ford, selling nearly 1.9 million units in its lifetime.

Before the Ford Capri arrived in 1969, GT cars had tended to be expensive, temperamental and rather impractical. But Ford felt that there was no reason why a four-seater coupe couldn’t look stunning and be incredibly quick yet be as easy and cheap to run as a Ford Escort. They were proved right, and Capri was to be a hit from day one and continued to be a British favourite until its demise in 1986 when it had become overshadowed by the arrival of the ‘hot hatchback’. During its lifetime, the Capri was available in a wide range of styles over three distinct ‘Marks’, but all of them had at their heart affordable fun and everyday practicality. Nothing has ever quite replaced the Capri, but it lives on in the fond imagination of everyone who owned and loved it.

The Capri entered its design phase in 1965 in a collaboration between Ford’s German and British divisions. Originally due to be named the Colt, as a nod to the afore-mentioned Mustang, the car was aimed at attracting a younger audience, with its long bonnet, short tail and fake air vents in the rear wings. 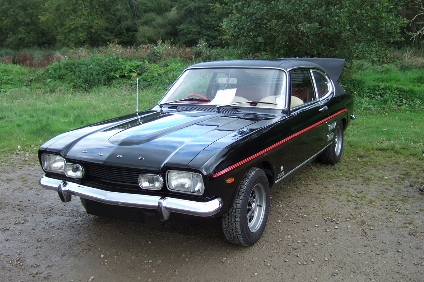 The first car was completed in 1968, followed by 2 months of production prior to the official release date to ensure that every Ford dealer had a Capri on its forecourt in time for its big launch. During this time, Ford had spent time in court with Mitsubishi arguing about the rights to the Colt name. But Ford were to lose the case, and this forced them to change the name of the car to Capri for its official debut at the 1969 Brussels Motor Show.

Like the Mustang, which had been built on the same platform as the more practical Ford Falcon saloon, the Capri was built on the same platform as the Cortina in order to keep costs down. Priced at £890, it had a live axle with leaf-springs and drum brakes at the rear, MacPherson struts with disc brakes at the front and a four speed all-synchromesh gearbox as standard.

Also, like the Mustang, the Capri had a wide range of engines, the smallest engines they where fitted with was the 1.6 Pinto. The other engines where 2ltr Pinto (1.8ltr Pinto in Europe), 3ltr Essex V6 and then later the V6 Cologne 2.8i in 1980. Granada had the Cologne “2.8 Carburetter version up until 1980 and then went injection along with the Capri.

Ford entered the MkI Capri into the European Touring Car Championship in 1974, spawning its final, and fastest, iteration; the RS3100 (the RS3100 was only built and sold in Britain, where as Europe had the RS2600 version).   ETCC rules stated that 1,000 road going RS3100s had to be built in order for the race car to be eligible, so Ford diligently set about the project, or at least it was claimed. In reality, Ford built no more than 250 examples of the Capri RS3100, the road car was fitted with a de-tuned version of the race car’s 3.1-litre V6 engine, producing 148bhp and around 250Nm of torque. It featured vented disc brakes, lowered and stiffened suspension, a sports exhaust and a functional ducktail spoiler, meaning that it was capable of 0-60mph in 7.3 seconds and a top speed of around 125mph. Though under-appreciated in its day, the Capri RS3100 is now regarded as the best-performing and best handling version of the first-generation Capri and can command prices of more than £40,000 today.

In response to the 1973 oil crisis, Ford decided to modify the Capri’s design for 1974, making it more suitable for everyday use. Revisions included a shortened nose, a more spacious cabin, a more practical clamshell rear hatch and a foldable rear bench seat, all of which made the Capri easier to manoeuvre and live with.

Ford also made the car easier to drive by softening its suspension, adding larger disc brakes for the front and providing the option of an automatic gearbox and power-assisted steering for the higher-specification models. To remedy the charging issues of the Mk1, Ford gave the MkII Capri a standard fit alternator in place of the MkI’s dynamo.

The second-generation Capri also received a simplified engine range. The MkI 2litre V4 engine suffered from over heating issues as the engine unit was too small for the heat generated so the later MkI Capri’s where fitted with the Pinto engine and they then had the option of 1.6 litre and 2 litre.  The base model for the MkII Capri was a 1.6 litre Pinto. The Kent engines where phased out on the MkI’s as the the Pinto was being used in the later MkI’s.

Midnight is a colour code for the black JPS MkII Capri, JPS where sponsoring the Ford works racing team in 1975 so Ford produced the JPS special Capri which was available in Black or White with gold striping and the engines where stamped with ‘JP’ in the engine number, the car registration also started with JPS and would of had the last letter as a ‘N’ or ‘M’ for 1975. This was only available on the MkII Capri.

Affectionately known as Project Carla, the MkIII Capri began its design phase in 1976. Due to its tight budget, the project ended up being little more than a facelift of the MkII, with updates being limited to a set of redesigned twin headlights, new wings, a new bonnet, fresh bumpers and updated paint and interior options.

Also, in the interest of saving money, the MkII Capri’s engine range was carried over to the MkIII, helped only with a few minor improvements. For example, the 1.3 litre Kent and Cross Flow engines where phased out in the later MkI Capri’s and where never used in the MkII and the reshaped cylinder bores, which greatly improved reliability.

Also in 1980, Aston Martin where taking in the 2.8 Mk3’s and tweaking them up with their own suspension, twin or quad turbo and body kitting them, these are known as the Tickford Capri.

In 1981, more stringent emissions regulations ousted the 3.0-litre Essex V6 and Ford replaced it with the Cologne 2.8, this wasn’t fuel injection. The Granada had this engine but later had the injection version when the MkIII Capri 2.8i was launched in 1980/81. The response to the new engine was good. with journalists noting that, even though the Capri was priced to compete with the BMW 323i or Alfa Romeo Alfetta 2000 GTV of the day, its engine was larger, and it offered a more refined drive and it was faster. 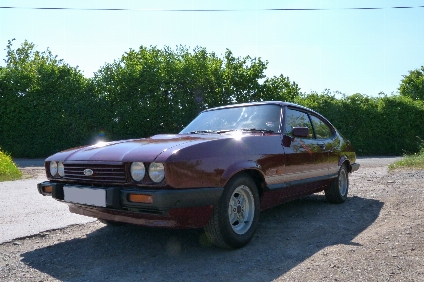 The Brooklands 280 Capri was know as the Farewell Capri as it was the last to be manufactured, Capri sales ended at the end of 1987.

The Capri was designed before the Mustang, the Capri was starting its testing phase as the Mustang was being developed (so it is a bit of a chicken and/or egg’ scenario) however the Capri is 51 years old in Luxembourg as it was being sold in 1968 over there.

Ford America where so amazed at the Capri sales in Europe that they decided to produce the Capri in America. At that time Ford owned the Lincoln-Mercury Motor Company and that company produced the Mercury Capri with V8 engines. Apache and Chieftain where their top spec models. Ford Australia and South Africa also started producing Capri’s (Perana), theirs also came with V8 engines and in Australia there is a MkIV Capri but that ended production in 1990 as the front wheel drive MkIV didn’t sell very well.

There has been many variants of the Capri after market, such as the Crayford. Crayford is a coach builder in London that started converting Ford Corsairs, Escort’s, Cortina’s and Capri’s into soft tops under licence from Ford.    Turbo Technics in Northampton where fitting standard ford models with their own Turbo systems. Ford where so impressed that they had Turbo Technics commission the Turbo Technic Capri in 1984. This was the 2.8 injection model with serious BHP compared to the standard.

In 1974, on the MkII Capri, Jeff Uren was commissioned to build a race Capri. The Capri Stampede was born, fitted with the V8 Ford Boss unit. Only nine of this model where built and they owned the touring class they entered until new regulations where implemented.

There is no doubt that the Ford Capri remains an iconic name even today, loved by enthusiasts and with a well-earned place in motoring history for the way that it made sports-coupe styling and performance accessible to mainstream car buyers.

Page load link
We use cookies on our website to give you the most relevant experience by remembering your preferences and repeat visits. By clicking “Accept All”, you consent to the use of ALL the cookies. However, you may visit "Cookie Settings" to provide a controlled consent.
Cookie SettingsAccept All
Manage consent

This website uses cookies to improve your experience while you navigate through the website. Out of these, the cookies that are categorised as necessary are stored on your browser as they are essential for the working of basic functionalities of the website. We also use third-party cookies that help us analyse and understand how you use this website. These cookies will be stored in your browser only with your consent. You also have the option to opt-out of these cookies. But opting out of some of these cookies may affect your browsing experience.
Necessary Always Enabled
Necessary cookies are absolutely essential for the website to function properly. These cookies ensure basic functionalities and security features of the website, anonymously.
Functional
Functional cookies help to perform certain functionalities like sharing the content of the website on social media platforms, collect feedbacks, and other third-party features.
Performance
Performance cookies are used to understand and analyze the key performance indexes of the website which helps in delivering a better user experience for the visitors.
Analytics
Analytical cookies are used to understand how visitors interact with the website. These cookies help provide information on metrics the number of visitors, bounce rate, traffic source, etc.
Advertisement
Advertisement cookies are used to provide visitors with relevant ads and marketing campaigns. These cookies track visitors across websites and collect information to provide customized ads.
Others
Other uncategorized cookies are those that are being analyzed and have not been classified into a category as yet.
SAVE & ACCEPT
Powered by