Home » Motoring Milestones in 2019
Previous Next

A year for big birthdays

As you’ll probably know, 2019 is the year that the Mini celebrates its 60th birthday and to mark this special motoring milestone, the central theme of this year’s BVAC Classic is ‘The Year of the Mini’.

We believe the Mini to be the most iconic British car ever and are delighted to celebrate 60 years of this much-loved small car in a big way at our Festival of Motoring.

But quite incredibly, 2019 is also a year that is absolutely jam packed with other motoring milestones, significant birthdays and anniversaries. From the Mini to the Ford Capri, the Bentley to Fiat and the Austin Healey 3000 to the Jaguar Mk 2!

From the birth of several very famous models to anniversaries of some of the biggest car manufacturers, let’s look at some of the motoring milestones which are also enjoying a special celebration in 2019.

The luxury car connoisseur Bentley turns 100 years old this year.     Headquartered in Crewe, the company was founded as Bentley Motors Limited by W. O. Bentley in 1919 in Cricklewood, North London and became widely known for winning the 24 Hours of Le Mans several times during its 100 year history. Prominent models from the historic racing era include the Bentley 4½ Litre and Bentley Speed Six to the more recent Bentley R Type Continental, Bentley Turbo R and Bentley Arnage. 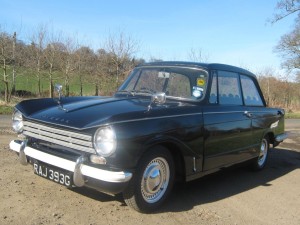 The Triumph Herald is a small two door car introduced by Standard Triumph of Coventry. Launched in 1959, the Triumph Herald would go on to be very popular in the 1960s and more than half a million were produced by the time production ceased in 1971.

One of the new small family car stars of the 1959 Motor Show, the Herald was a bit more upmarket than the Mini or Anglia. All that really held it back was the lack of power from its 948cc engine. The body design was by the Italian stylist Giovanni Michelotti and the car was offered in saloon, convertible, coupé, estate and van models. The Triumph Herald was unusual because it had a separate chassis which meant that the main body was bolted to the chassis and the whole front end hinged forward to allow access to the engine.

Founded in 1919 by André Gustave Citroën, the iconic French manufacturer has delivered many motoring legends in the last hundred years. From the farmer friendly 2CV, the Traction Avant (as seen in Tintin), the seminal, cool and self-levelling DS or the head-turning SM coupé. Not to mention the eight World Rally Championships that Citreon has won.

Quite remarkably, yet another giant of motoring celebrates a big anniversary in 2019 as Fiat also turns 120 this year.

Founded in Turin in 1899, the iconic Italian marque has delivered a host of equally iconic cars over the years, from the much-loved Fiat 500 to the gorgeous Dino to the elegant 124 Spider. Not to mention Fiat’s incredible rallying success and borrowing engines from Ferrari! Fiat has certainly made its marque. 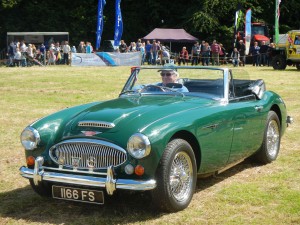 For many the quintessential British sports car, Austin-Healey’s lovely roadster turns 60 this year.

The most popular of the ‘Big Healey’s’, ironically the 3000’s small size did not diminish its success in both the showroom and competition over eight years and three models. First revealed in 1959, it went on to be highly successful in European rallying taking multiple class wins in its heyday, indeed the Healey is still competitive in classic motorsport to this day.

Another big name that is celebrating a tres grand birthday, French manufacturer Renault turns 120 this year.

Founded by three brothers in 1899, Renault has given the world everything from the Voiturette to the supermini 4CV to the boxy little rally legend that is the 5 Turbo. And of course, a host of Alpine ready machines, a fleet of Formula 1 cars and the ubiquitous Renault Clio. 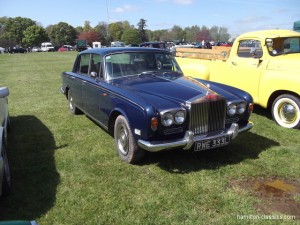 The Rolls Royce Phantom V was the last word in luxury when it was launched in 1959.

Perfect for cruising with its 6.2 litre V8 engine, automatic transmission and power assisted steering which came as standard, just 516 of these very special Rolls Royce’s were ever built.  Unsurprisingly they were most popular with dignitaries and royalty, the Queen and John Lennon were two of the Phantom’s most famous owners.

Not a classic car, not a famous marque but a motorway!

The M1 which opened in 1959, was Britain’s first city to city motorway, responsible for manufacturers producing cars which could cruise along mile after mile of open road. And in 1959 there were no speed limits, barriers or lights on this very open road, or the traffic jams and congestion of today. The M1 Motorway was undoubtedly a pivotal factor in the development of wonderful machines such as the E-type, the DB5 and the Silver Shadow.

A fast, affordable Ford coupé for Britain’s roads. The muscular styling of the Ford Capri proved to be a massive success with the public, with 400,000 sold in the first two years alone. Designed by American Philip T. Clark, who was also involved in the design of the Ford Mustang, it used the mechanical components from the Mk2 Ford Cortina and was intended as the European equivalent of the Mustang.

Launched in 1969, two further generations of the Capri would follow before production ended in 1986, with a whole range of models and specifications offered.

Often referred to as the ‘Auntie’, the Rover P4 caused a sensation when it was launched at the Earls Court Motor Show in 1949. Officially known as the Rover 75 (the 80, 95, 100, 105 and 110 would follow), it looked very futuristic with its rounded corners and no running boards. The Rover P4 remained in production until 1963 when it gave way to the innovative Rover 2000/3500.

The Jaguar Mk 2 which arrived in 1959 to replace the ageing 2.4 litre and 3.4 litre models was an extremely spacious and drivable executive saloon.

The Mk 2 absolutely set the benchmark for cruising Jaguars, with its speed, style and grace. The car gained a reputation as a capable car among criminals and law enforcement alike; popular as getaway cars, they were also employed by the police to patrol British motorways.

The Jaguar Mk 2 is also well known as the car driven by fictional TV detective Inspector Morse. In the original novels by Colin Dexter, Morse had driven a Lancia but John Thaw insisted on his character driving a British car in the television series.

The second generation of Mercedes Benz cars to bear the S badge. Plans for the W126 began in 1973, just a year after the W116 had launched, with goals including improved ride, better handling and improved fuel efficiency. It launched in December 1979 to great success and remained in production until 1992.

The Porsche 914 was originally devised as a joint effort between Porsche and Volkswagen. Unfortunately following the death of the VW Chairman, the deal fell apart with Porsche funding the entire project. Luckily the 914 was released in 1969 and became Porsche’s top seller, even outselling the 911 at stages.

The Mazda MX5 signalled a rebirth for the sports car and following its launch in 1989 it became an icon of the 90’s, with its pop-up headlights and all.

The MX5 would go on to win multiple awards from the motoring press including Automobile Magazine’s 1990 Automobile of the Year.

And last but certainly not least, the humble little Mini has certainly made a big impression in the six decades since British Motor Corporation first introduced the world to a small car that would go on to become one of the nation’s greatest icons.

Happy Birthday to you all!

Page load link
We use cookies on our website to give you the most relevant experience by remembering your preferences and repeat visits. By clicking “Accept All”, you consent to the use of ALL the cookies. However, you may visit "Cookie Settings" to provide a controlled consent.
Cookie SettingsAccept All
Manage consent

This website uses cookies to improve your experience while you navigate through the website. Out of these, the cookies that are categorised as necessary are stored on your browser as they are essential for the working of basic functionalities of the website. We also use third-party cookies that help us analyse and understand how you use this website. These cookies will be stored in your browser only with your consent. You also have the option to opt-out of these cookies. But opting out of some of these cookies may affect your browsing experience.
Necessary Always Enabled
Necessary cookies are absolutely essential for the website to function properly. These cookies ensure basic functionalities and security features of the website, anonymously.
Functional
Functional cookies help to perform certain functionalities like sharing the content of the website on social media platforms, collect feedbacks, and other third-party features.
Performance
Performance cookies are used to understand and analyze the key performance indexes of the website which helps in delivering a better user experience for the visitors.
Analytics
Analytical cookies are used to understand how visitors interact with the website. These cookies help provide information on metrics the number of visitors, bounce rate, traffic source, etc.
Advertisement
Advertisement cookies are used to provide visitors with relevant ads and marketing campaigns. These cookies track visitors across websites and collect information to provide customized ads.
Others
Other uncategorized cookies are those that are being analyzed and have not been classified into a category as yet.
SAVE & ACCEPT
Powered by